It’s been a long time since I made any updates to this section so I figured I would give an update since people ask.  My dad still has this car in the garage and drives it on the weekends and it’s pretty much done at this point.  At some point I would like to replace the hood with a cobra hood to get rid of the cutout fake cowl and to remove the boss graphics but no time and don’t want to spend the money.  It still runs great and drives nice!

Here is a video of when I first got the car done and took it out to the drag strip to see what it would do.  The clutch pedal would stick to the floor after every pass since it was the original OEM clutch and the pressure plate was just worn out.  Either way it didn’t do too bad for not being able to really launch it hard.

My Dad purchased this car with only 14k miles on it in 2007 with a stroked 351w swapped into it for a total of 393 cubic inches with nitrous. The car needed and still needs some more cosmetic cleanup. Eventually once the swap is done the hood will be fixed properly and the rest of the boss graphics removed so it looks like a fairly normal Mustang. Normally I would tell him to stay away from something like this because it didn’t really run right and sat for years in somebody’s garage but I told him that even if the motor was bad it was still a screaming deal for what he paid for it. I should have kept my mouth shut because sure enough it spun some bearings about a week off the trailer. So I told him I had an idea that would make it faster, lighter, and get twice the gas mileage all at the same time. 🙂 Enter the LS1 T56 swap project, the pictures are just a progression of how the car is being slowly worked on.

I started with removing and selling off much of what was good to fund this project. At least a lot of the parts were still clean and workable so I was able to recoup a lot of the costs involved. I used an mmr 4.6L mod motor k-member with tubular front a arms and Tokiko shocks with a coil over kit. The motor mounts are 4.6L mod motor polyurethane bushings that I cut the 3rd long end off and extended along with elongating the other 2 holes so it mounts up to the LS1 block. The transmission cross member was moved to the backside of the original mounting position and another mount point was added behind that because the transmission is longer than the stock T5. I took the factory driveshaft and took it to a driveshaft shop to remove the factory front yoke and put on the T56 yoke and shorten it to length. I had purchased a set of Kooks long tube headers made for an LS1 swap into a mustang but they hit all over the place on this beefy road racing style k-member so I just had some custom long tubes made. An LS1 Camaro radiator and fan assembly made it’s way in the front to replace the factory stuff because I could find hoses that were the correct length/direction and the fans worked perfectly with the LS1 PCM. I called Speartech and ordered a custom standalone LS1 harness which included an f-body gauge cluster connector so I could wire up an f-body gauge cluster assembly to replace the factory gauges. I figured this would be the easiest way to integrate everything and just tap into the mustang wiring harness to feed the lights on the cluster like turn signals, brights, lighting, etc. I used a turbo coupe pedal assembly because they came hydraulic instead of cable, then cut down the rod on the f-body master cylinder to fit and punched a hole in the firewall to mount it for the T56 hydraulic clutch setup. 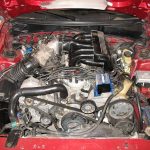 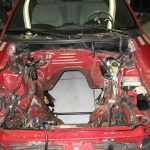 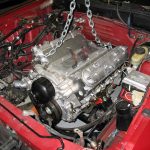 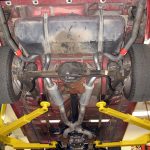 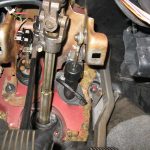 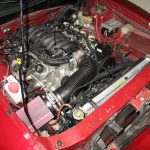 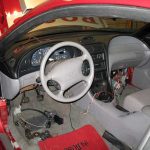