Well the time has come, I picked up a 19 ZR1 so this car has to go unfortunately.  I am going to leave this page here since it still has some fun media and still set some records in AZ at least.  It’s been fun!

I went back out to the Omega half mile event this past weekend to see what the car would do with the latest cooling updates, etc. I was hoping to hit 180 mph but the best I could do was 178.29, at the cones anyways since I stayed into it a bit longer just to hit the number. There was a pretty nasty headwind all day long except for this pass, other passes with the headwind were a couple mph lower. I tried backing up all the way to the rear on one of the other passes and it just spun pretty bad and ended up being worse so this was the best of the day. I wasn’t racing anybody next to me since I just wanted to get on it right away to hit that number, oh well maybe next time when it has a cam in it.

We had another private track rental yesterday and I took the C7 Z06 back out after some minor changes to see if I could set a new best. I added the larger Magnuson snout on the 2300 and the Nick Williams 102mm TB as well as CPR’s high flow Stewart intercooler pump upgrade setup. I got a new best 60′, new best ET, and a new best MPH that is just screaming fast for a stock engine with all of the “bolt ons” so to speak. Yeah I know the TVS 2300 is a grey area as far as being called a bolt on but it literally bolted on and just replaced the factory blower with no fuss so… The new best 60′ was a 1.355 but it was actually .001 slower than my new best ET. It was pretty much dead hooking but would unload the rear tires just a bit on the 1-2 shift so I was playing with tire pressures quite a bit to see if it would help and it made some minor improvements throughout the day. The fastest pass was at the end of the day when the DA was reaching 4300 ft, I could not imagine what this thing would run at a negative DA track. And yes, I am pushing this thing hard and am at the very limit of the factory fuel system even with meth injection but ran it like this all day long and made tons of passes. The funniest part is that I finally made my official NHRA Level 6 Sportsman 7.50-9.99 licensing passes in this thing so now I don’t have to dodge the track officials as much as before.  🙂  9.754 @ 143.51 in 4300 ft DA 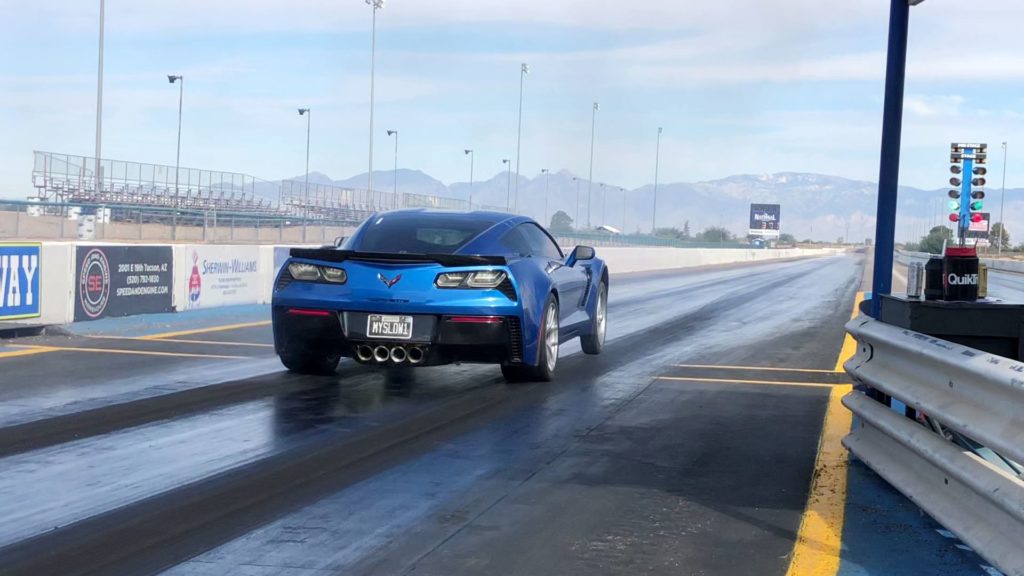 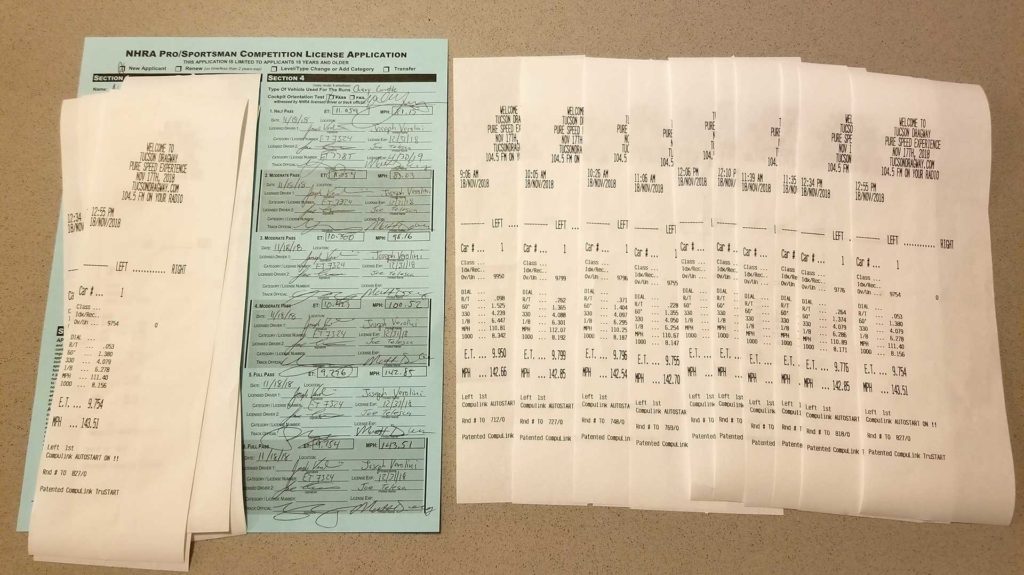 I was really trying to get this thing into the 9s with just simple bolt ons but the weather and traction just wasn’t going to let it happen, or at least I got impatient with the Magnuson TVS 2300 Heartbeat blower staring at me on the counter top.  I’ve had it sitting here for a month or so and I got anxious.  We pullied it to try to match what the factory blower was doing currently but it ended up being about a psi higher and the fueling was really at the limit of the factory fuel system.  Well it delivered with a 9.86 @ 142 mph!

Got a new best 60′ today at another private track rental down at Tucson Dragway, a whopping 1.379!  I couldn’t believe it, still 100% stock suspension on an 18″ drag radial in a damn road race vehicle made to go around the twisties. 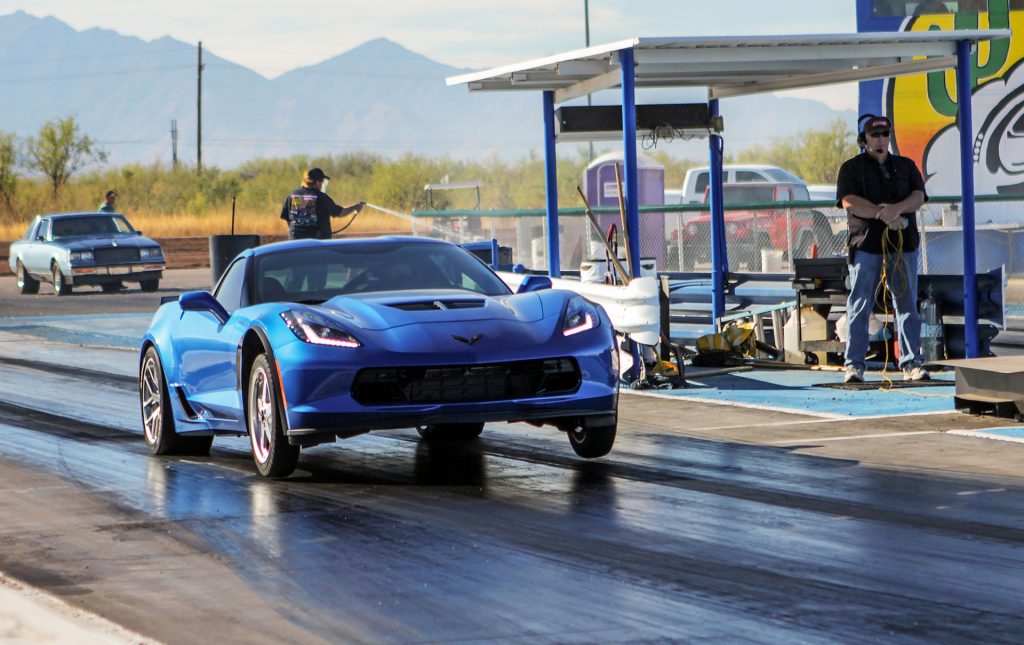 Here is just a small compilation of some of my videos from Spring Mountain Motorsports Ranch on February 27th and 28th 2017 at the Corvette Owners School. This place was pretty amazing from the facilities to the instructors, really top notch and a well run program. Running a C7 Z06 hard at the track like this really gives you the confidence in the car and what it’s capable of. The cars are 100% stock and only have fluid changes and a race alignment. It was stable, forgiving, and even when pushing it a bit too much into a corner, mid corner slide, or coming out it was very balanced and easy to reel back in. You can hear the PTM kicking in as I would roll into the gas coming out of some of the corners a bit too soon/hard. I was really surprised at how well it communicated when you were at the limits of the tires and never once did I think that it was out of control, actually I wished it had more power like mine does as that would have helped down the straights and made up for my slower sections. LOL!

I overlayed and sync’d the PDR video on top of my GoPro video just because you get a better sense of speed with the wider view. Plus it’s easier to see my turn in and mid turn corrections on the wheel when I can see my hands so I can learn what worked and what didn’t. I was finally starting to get used to the lateral grip and brakes on this car towards the end and realized I was braking too early and scrubbing too much speed in many of the corners. Pretty sure I could have downshifted to 3rd in another section to help my exit acceleration a bit more but they wanted us to hold back on the gear changes, maybe next time!

Again, another private track rental down at Tucson Dragway on the 12th and ended up borrowing some 18″ wheels with Hoosier Drag Radials on them.  The weather was OK but the DA still kind of sucked hovering around 4400 ft but I still got a new best out of it!  10.247 @ 136.68 with simple bolt ons, gotta say I’m impressed with this car.  The front wheels were off the ground for 3-4 frames in the video so that counts as wheels up LOL!

So I went out to another track day rental down in Tucson on November 20th but i finally had a chance to update this page.  The DA was still pretty high at ~4800 ft when I ran my new best time but at least it went faster.  I did end up putting on a skinny wheel/tire setup up front that saved 10 lbs on each corner but I also put on a set of replica 19″ wheels in the rear with NT05Rs on them and that added back 10 lbs per corner so it’s kind of a wash.  I guess the front MIGHT have had a bit lower rolling resistance but with the factory run flats that are REALLY stiff to begin with I’m not sure it’s much of a benefit.  Either way it went 10.54 @ 136 MPH and I can’t wait to see what it does when it’s nicer out!

I guess it’s better late than never but I am finally adding a section for my 2016 Z06.  I bought it back in February of this year but am just now getting around to updating the site.  After having sold my TT GTO I had just stuck the money in the bank as I was planning on buying a new ZL1 Camaro whenever they were going to come out but anybody who knows me knows that I’m not a patient person.  The only other car I was interested in at that point was a new Z06 as I felt it really was the total package.  It can turn, it can brake, and it can go fast all extremely well yet it can literally be driven on a daily basis and be comfortable with decent seats and all of the amenities. GM finally did it with the new Z06 and I had to have one.

Here is a video of when I took it to a private track rental down at Tucson Dragway in 95 degree weather at 6000 FT DA.  I wasn’t really ready to take it out to the track yet since I wanted to get some better tires more suited for the drag strip but somebody dropped out so I took it along with my Camaro.  Somebody there had a set of Z06 wheels with some Nitto drag radials so I made a quick pass on them and was pleasantly surprised with the outcome!

And here is a quick video doing some baseline pulls on the dyno just to see what it would make, and because it sounded cool running through the gears.